At an international press conference this week, Siemens Mobility presented what will be new at Innotrans in the fall. For weeks, railway enthusiasts were wondering what the white-blue test car #seeitnovo was all about. The innovation is already on its way. The car is used to test the concept of the Velaro Novo from Siemens - possibly the next ICE generation. 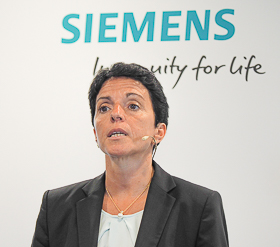 As Sabrina Soussan, CEO of Siemens' Mobility Division, says, "the Velaro Novo is a response to the global requirements of high-speed rail traffic and a platform with uniquely optimized energy consumption and maintenance, with maximum flexibility and reliability. At 300 km/h, the new train will require up to 30% less energy than the single-system Velaro TR, as it was last delivered to Turkey.

The aerodynamically optimised high-speed train is designed for top speeds of 250 km/h to 360 km/h (155 mph to 223 mph) and contains many interesting technical solutions, which are described in a background paper for journalists. I quote the main parts of it:

The new high-speed train from Siemens combines the experience of three Velaro generations since the Velaro E for Spain (AVE S103) was delivered in 2005. The more than 1,000 Velaro trains worldwide have so far operated over two billion kilometres at speeds of up to 380 km/h, with around one million kilometres being added every day. The new Velaro Novo multiple unit is based on the distributed traction that has been tried and tested since the ICE 3, can be realised as a single or double system train (15kV / 25kV) and has a traction system for maximum speeds of 250 km/h to 360 km/h. Accordingly, the multiple units have drive powers from 4,700kW to 8,000kW. In seven-part design, the Velaro Novo reaches a length of 202m and can be operated in both single and double traction. A 14-part version with a length of 404m is also available.

With the Velaro Novo, Siemens is building on the Velaro success story - and continuing it with innovations in the field of energy efficiency. At 300 km/h, the new high-speed train requires 30 percent less energy than previous Velaro models, saving 1,375 tons of CO2 per year. An essential prerequisite for increased energy efficiency and the resulting significant reduction in life cycle costs is consistently improved aerodynamics. The fully enclosed bogies reduce energy consumption by around 15 percent and reduce noise emissions. The aerodynamically further optimised end cars with a more inclined front surface, like the car transitions flush with the outer skin, contribute to a significant reduction in driving resistance and thus reduce energy consumption by ten percent. The high-voltage system on the roof is also fully enclosed and contributes to an improvement in aerodynamics. In addition, the Velaro Novo is over 15 percent lighter than the previous Velaro generations.

New profile and welding technologies for the car bodies, mass optimised, internally mounted bogies, new on-board converters and the use of innovative materials and design solutions are just a few of the developments that led to a reduction in train weight of over 70 tonnes. Bogies mounted on bearings have proven their worth on the Desiro City multiple units used in Great Britain and were combined and further developed for the Velaro Novo with the experience of the Velaro bogies. The running and drive bogies are considerably lighter due to the internally mounted wheelsets and guarantee better running smoothness and less wear due to their lower unsprung mass.

Maintenance costs for the new train will also be significantly reduced. The continuously recorded condition data of the vehicle can be analysed and evaluated for specific instructions for the predictive planning of maintenance work in the sense of condition-oriented maintenance. The high-performance electrical brake with braking resistor means that service braking is largely wear-free. Maintenance costs for the pneumatic brake system are thus significantly reduced.

The car bodies of the Velaro Novo are designed in a lightweight structure and follow the principle of the empty tube. This means that there are no fixed or immovable fixtures and the interiors can be furnished according to the customer's ideas and can be changed over time if requirements change. The wagons do not require lower seat containers or electronic cabinets in the passenger area. Despite the car's length of 28.75 metres, which results in a narrower car body due to the clearance profile to be maintained, the aisle width of 535 millimetres has been increased by 11 millimetres for the same seating comfort as the Velaro. A variant with a wide car body and thus possible 2+3 seating is available for use on lines with a larger structure gauge. Internet supply, passenger information systems, on-board entertainment and safety monitoring systems (CCTV) can be integrated according to customer requirements.

Siemens has been testing the innovations of the new high-speed train since April 2018. A single wagon test vehicle, integrated in the ICE S of DB Systemtechnik, is currently undergoing test runs throughout Germany. Testing is carried out under various operating conditions, including recording and analysis of the behaviour of the body and bogies. These data are used for project-independent testing and validation of the essential vehicle characteristics.

The Velaro Novo from Siemens is a logical further development of three Velaro generations. Numerous innovations in detail make the new high-speed train a unique, highly efficient vehicle that consumes up to 30 percent less energy and significantly reduces investment and maintenance costs. At the same time, the available space was increased by ten percent. Thanks to its empty tube principle and numerous configuration options, the Velaro Novo is future-proof and can be flexibly adapted to new ideas and requirements of operators even after years of operation. <<

With these key figures, Siemens says, the Velaro Novo sets a new standard in high-speed rail traffic. There is probably no better alternative on the market, at least in Europe and the USA.

One of the project managers said that of course all customers were talking about the new train, not only with DB AG. It is quite possible that we already see the ICE 5 here. The first Velaro Novo is scheduled to go into passenger service with future customers in 2023. The Novo could be an attractive train for California, for example.

The railway and mobility divisions of Alstom and Siemens intend to merge in 2019. The fact that Alstom also offers high-speed trains is not yet an obstacle, especially since Siemens has been working on the Velaro Novo since 2013. "Until the merger is completed, we are competitors," said Sabrina Soussan. When asked whether she liked the TGV or the Velaro better, the French-born diplomatically said: "Politically correct, I would say: I like both."